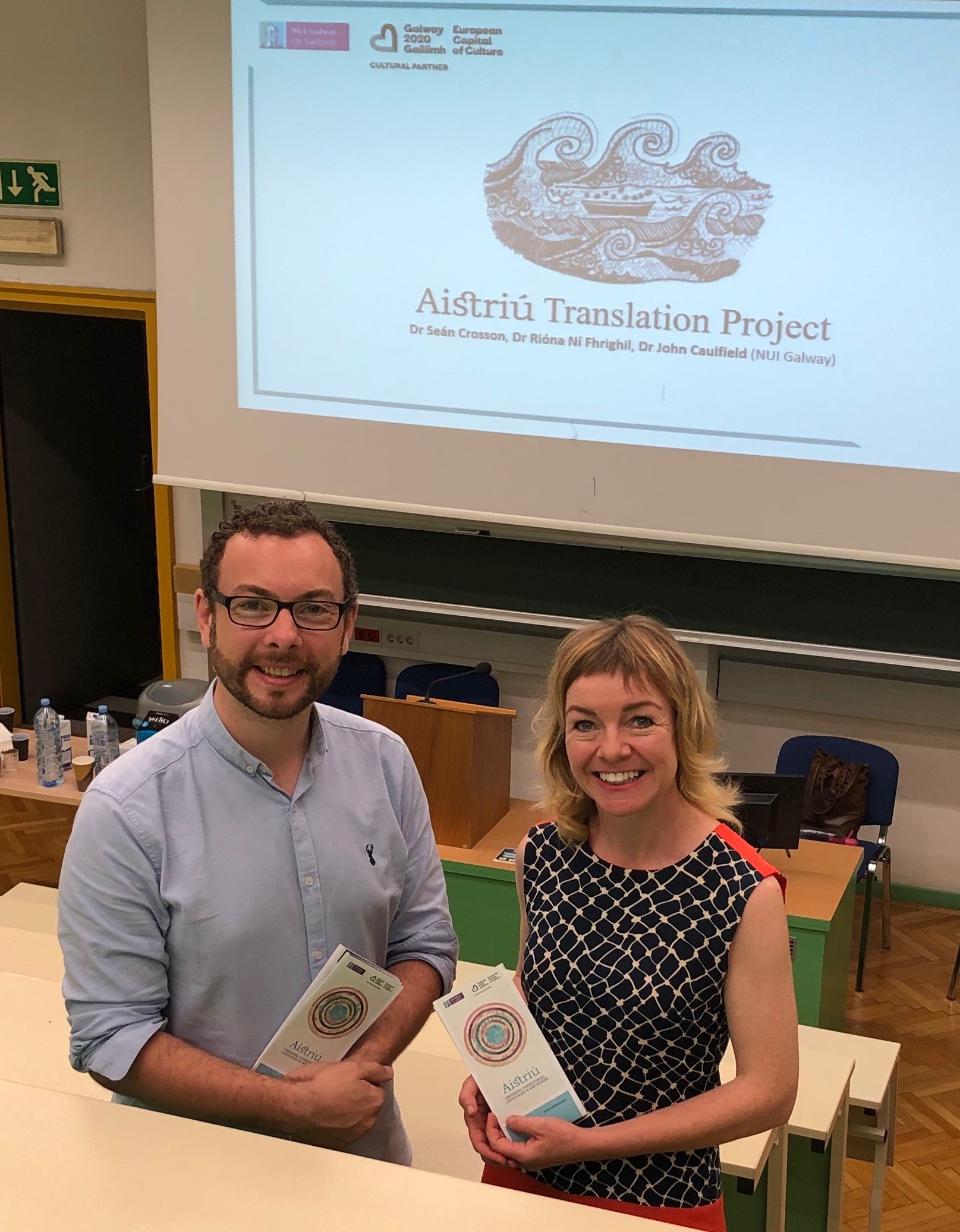 The Irish word Aistriú means to move, to translate and to change - a perfect title for a project based on Irish-language literary texts that speak to the theme of migration.

The Galway 2020 and NUI Galway project Aistriú will see the translation of these texts to other languages and to other art forms. The project grew out of a firm conviction that Irish-language literature is a valuable part of European heritage – it is, after all, the oldest literary tradition in the vernacular in Western Europe. The fact that Irish as a spoken language today is under immense pressure does not mean that literature in the Irish language is in any way inferior or less relevant. In fact, the opposite may be true. The large-scale dispossession and displacement of Irish speakers from the 17th Century onwards means that literature in Irish resonates with the experience of people of all creeds and colour who have experienced, or who are currently experiencing, displacement.

Between 1841 and 1925, 4.7 million Irish emigrants went to the United States. Migration from Irish-speaking areas was disproportionately high and became an integral part of the life of Irish-speaking communities, particularly in the wake of the Great Famine (1845-1850) and well into the 20th Century. Little wonder then that migration and emigration emerged as central themes in Irish-language literature in the nineteenth and twentieth century.

Aistriú includes excerpts from prose fiction by Máirtín Ó Cadhain, Pádraic Ó Conaire, Liam Mac Uistín and Alan Titley; excerpts from autobiographical writing by Peig Sayers, Dónall Mac Amhlaigh and Micí Mac Gabhann; a number of poems by Máirtín Ó Direáin, Nuala Ní Dhomhnaill and Louis de Paor. At present, all Irish texts are accompanied by English translations. Many of these texts were set pieces on the secondary school curriculum during the twentieth century. At a remove from the school setting, readers will be surprised, perhaps, by the way in which many of these texts critiqued the prevailing moral and social order.

Galway’s own Pádraic Ó Conaire explored the fate of a young (presumably pregnant) Irish woman who felt that emigration was her only option in the short-story ‘Nora Mharcuis Bhig’. The themes of respectability, familial expectations, social and religious mores, as well as alcoholism and prostitution are central to this short-story. The sympathetic betrayal of a female emigrant whose destitution was in no small part due to the conservatism and hypocrisy of a patriarchal society, was an audacious and radical gesture by one writing in 1906. A pioneering modernist whose writings were informed by his political socialism, the writer we encounter here is a far cry from the popular perception of Ó Conaire as a diminutive man who wrote innocuous, bucolic, stories.

The 17 texts included in the Aistriú project exhibit a range of perspectives on the theme of migration and emigration, ranging from the excited anticipation of the young females who eagerly awaited the passage to America, and who relished the thought of financial independence and a fulfilling social life, to the devastation felt by those left behind – ageing parents and grandparents in particular. The gruelling nature of the physical labour expected of male emigrants, along with the abysmal living conditions they endured, parallels the contemporary experience of many migrants.

A remarkable feature of much of this emigration literature is that it transcends the immediate historical and cultural context in which it was written and gives contemporary readers a valuable insight into the complexities of migration and emigration. There are uncanny parallels between the historical novel Esperanza by Liam Mac Uistín, based on a famine-ship voyage, and Alan Titley’s novel Gluaiseacht, the story of unaccompanied minors fleeing from Africa to Europe in unseaworthy vessels. Remarkably, Titley’s novel predated the so called ‘European migrant crisis’, by six years. The exploitative and abusive relationship between vessel operators and passengers desperately trying to flee their home country is explored in both novels – a timely reminder, if needed, that the exploitation of vulnerable migrants is neither unprecedented nor culturally specific.

During 2020, these literary texts will move to different languages through the medium of translation; artists will be invited to translate them from the page to their own chosen art form. We hope that this will change both how the public encounter and perceive Irish-language literature; not as literature marginal to contemporary experience, but as a literature that explores the margins, the non-dominant space that is central to existence of multitudes in a globally interconnected world.