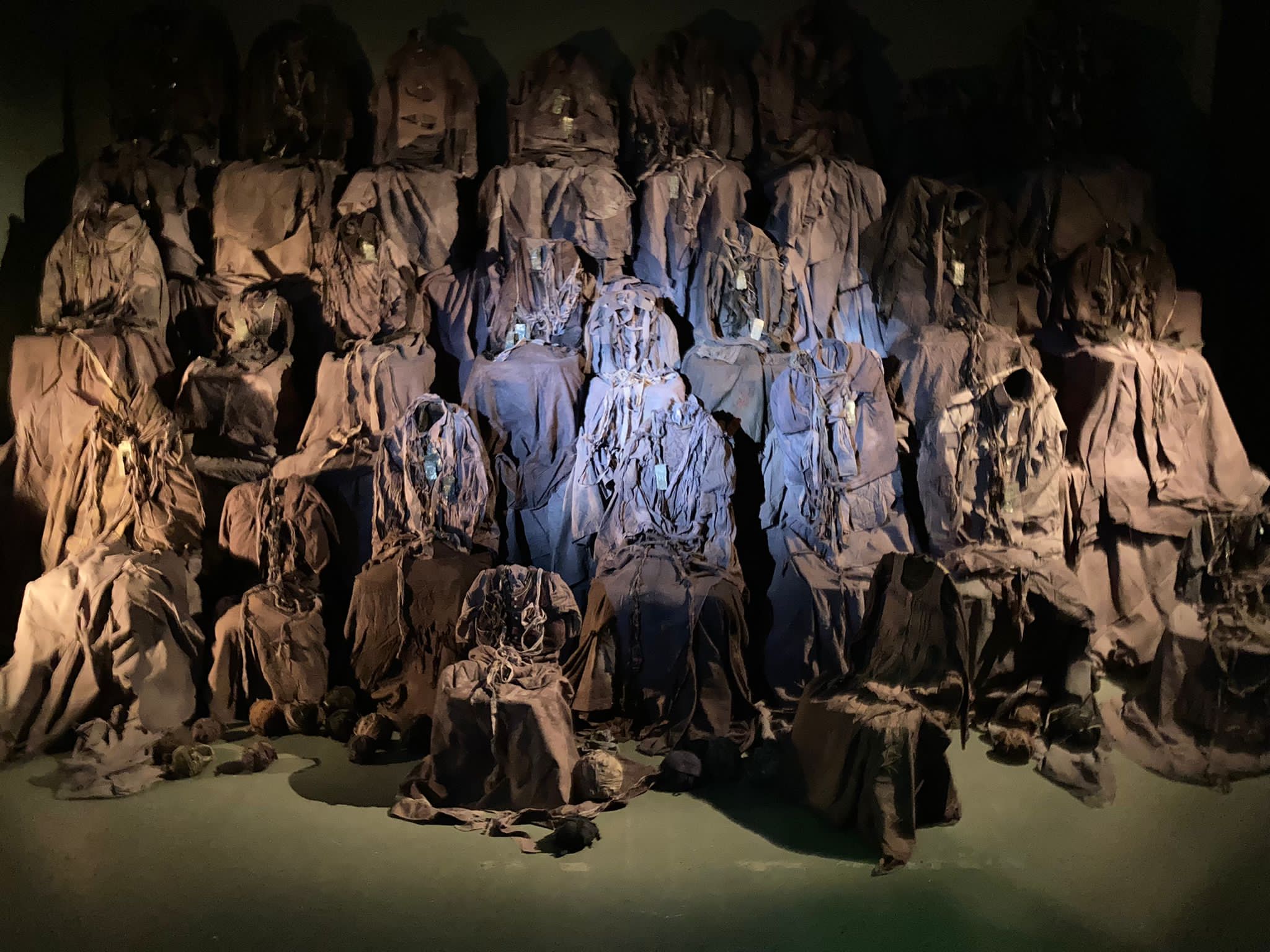 Originally planned for the Cúirt International Festival of Literature in 2020, the Covid-19 pandemic forced us to postpone an exhibition of work by Japanese artist Miho Ohtsubo during our year as European Capital of Culture, and present it instead as a video piece.

In 2021, we were delighted to finally welcome artist Miho Ohtsubo, scholar and translator Professor Mitsuko Ohno, and artists and assistants Hideyo Nagao and Takashi Hiraide to Galway to present the haunting installation 'Black Milk: Family Portrait'. Inspired by the poetry of Nuala Ní Dhomhnaill, as translated by Mitsuko Ohno, this exhibition is the first time for Miho's work to be shown in Europe.

It was presented in the Galway Arts Centre, in association with the Republic of Conscience research project at NUI Galway, and with the support of EU-Japan Fest.

Reacting to the exhibition of her work, Miho Ohtsubo said: "This opportunity to exhibit my work internationally is the fulfillment of many past efforts, and I feel it also encourages me to move forward with new ideas, which makes me very happy".

Explore a 360° below or click here to view online.

We would like to acknowledge the role of EU-Japan Fest in sponsoring this project. Since 1992, EU-Japan Fest has been supporting cultural exchange between the European Union and Japan, and we are grateful for their ongoing support in bringing Miho's work to Galway.

Photos from exhibition: Please note that Covid-19 rules were strictly adhered to throughout the exhibition with face masks, hand sanitising, social distancing, regular antigen testing and arrival and departure PCR tests in place. Masks were removed only briefly for publicity purposes or in a restaurant setting. 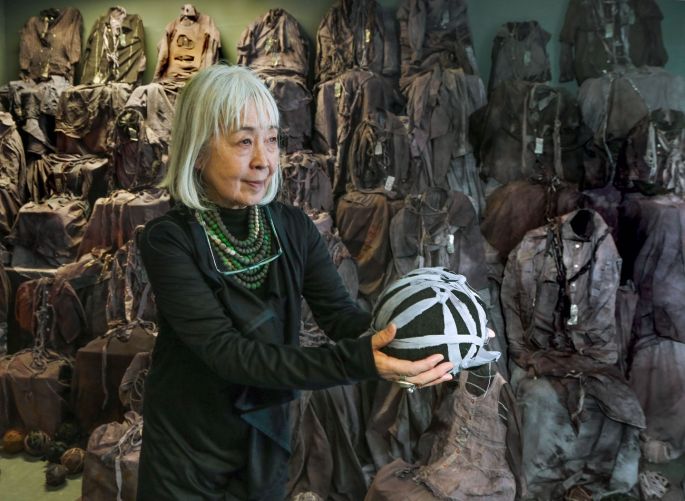 Artist Miho Ohtsubo featured as one of The Irish Times Images of the Day at the launch of Black Milk: Family Portrait. See more on irishtimes.ie. 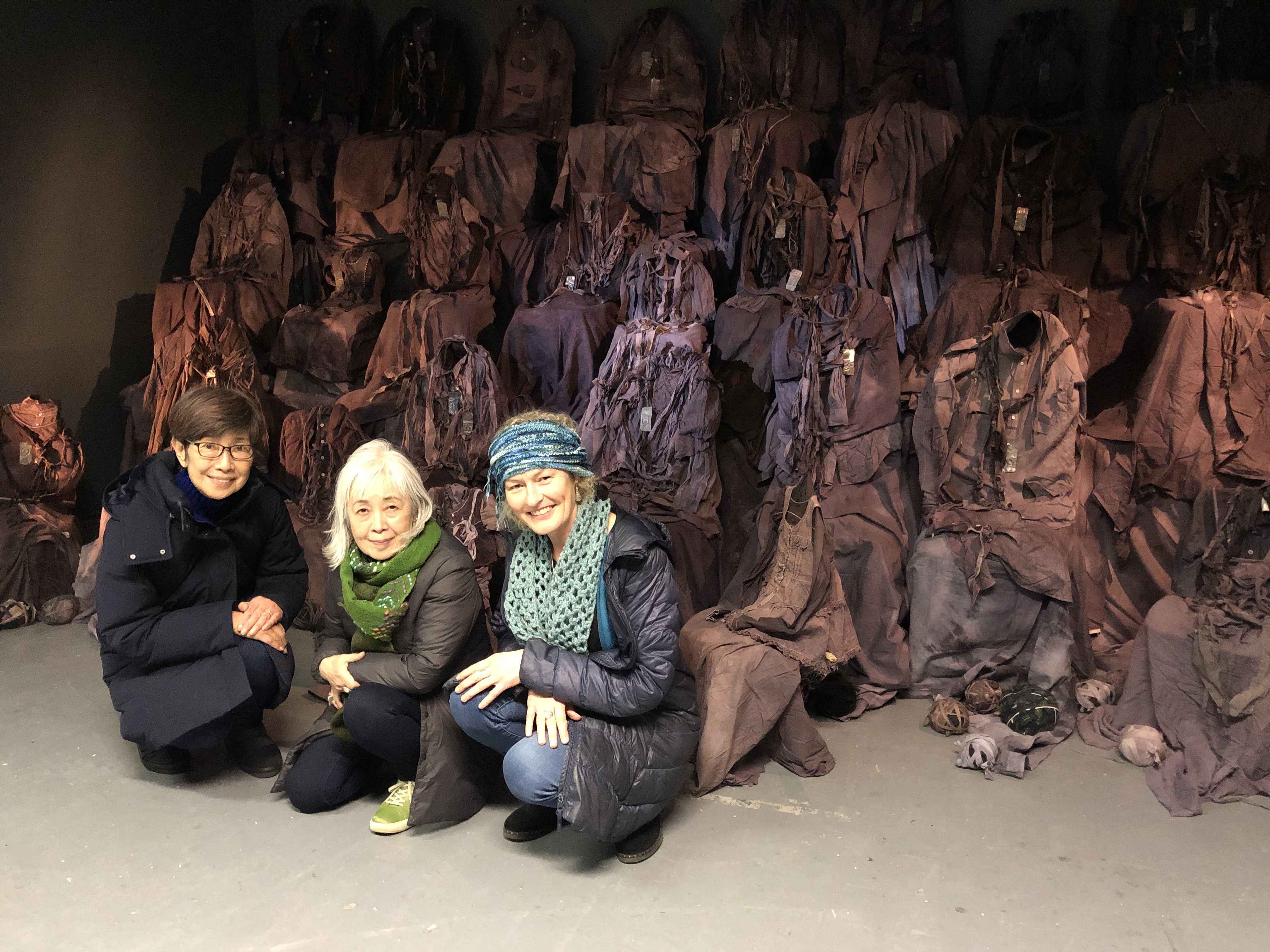 Professor Mitsuko Ohno and Miho Ohtsubo are joined by Siobhán O'Malley, former Galway 2020 Cultural Producer who was central to establishing this EU-Japan Fest collaboration for Galway 2020. 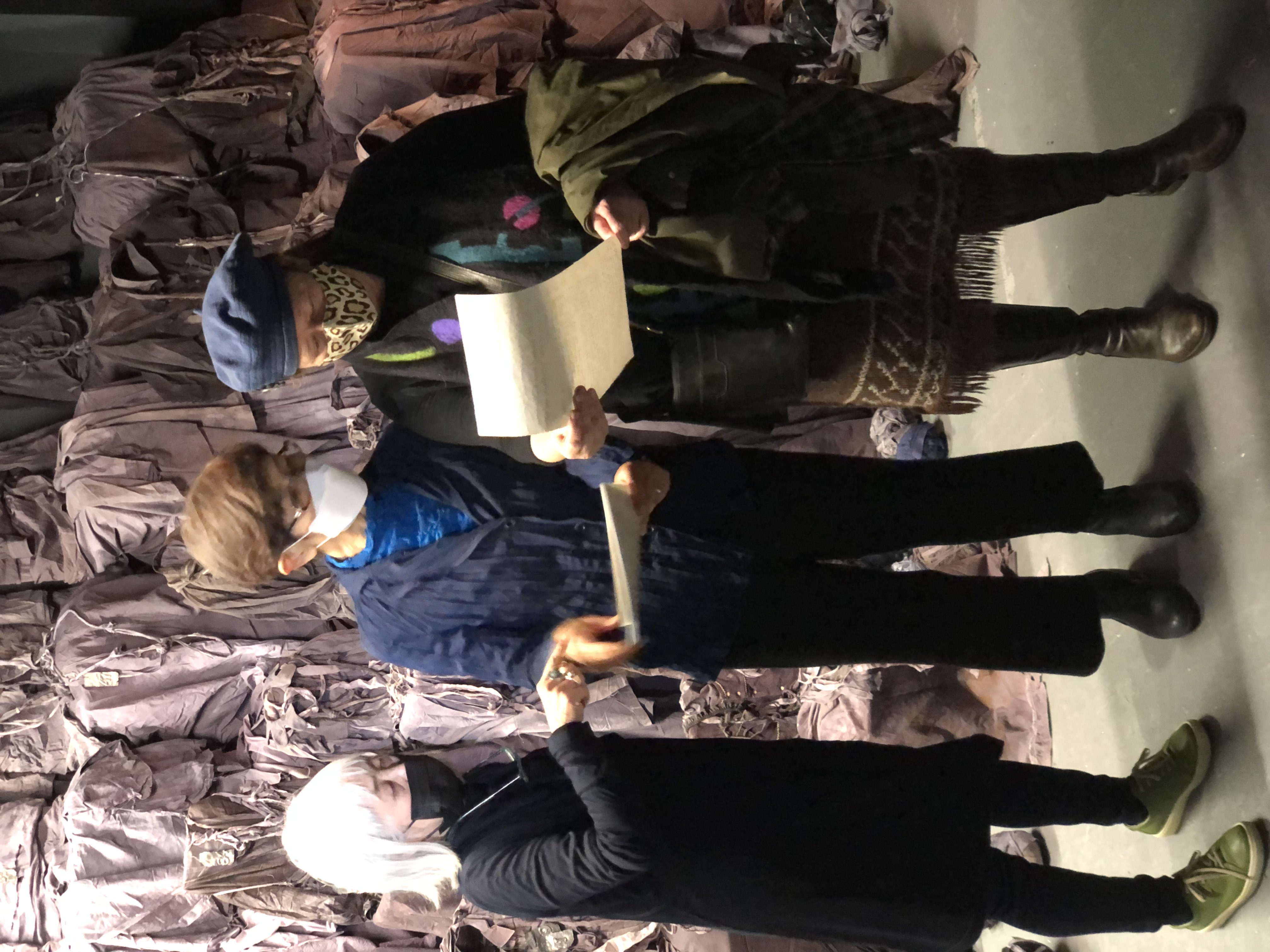 Miho Ohtsubo and Professor Mitsuko Ohno were supported before, during and after their visit by artist and arts producer, Dolores Lyne, who gave her invaluable practical and professional support in presenting, installing and protecting the work. 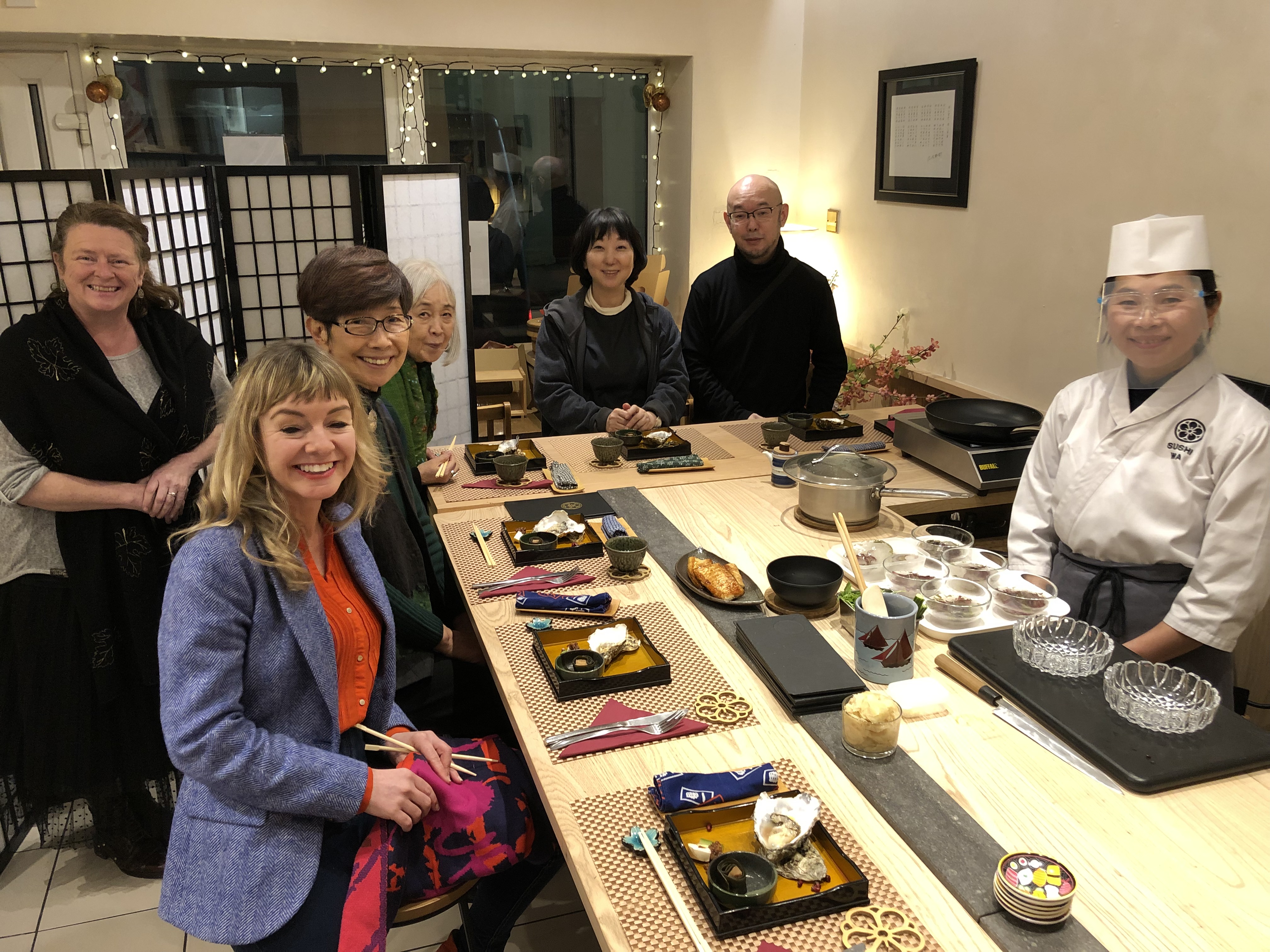 The wider Black Milk team enjoyed an unforgettable eight-course meal of Japanese food in the award-winning Wa Café in Galway. It was a real treat to see chef Yoshimi Hayakawa (far right) in action. 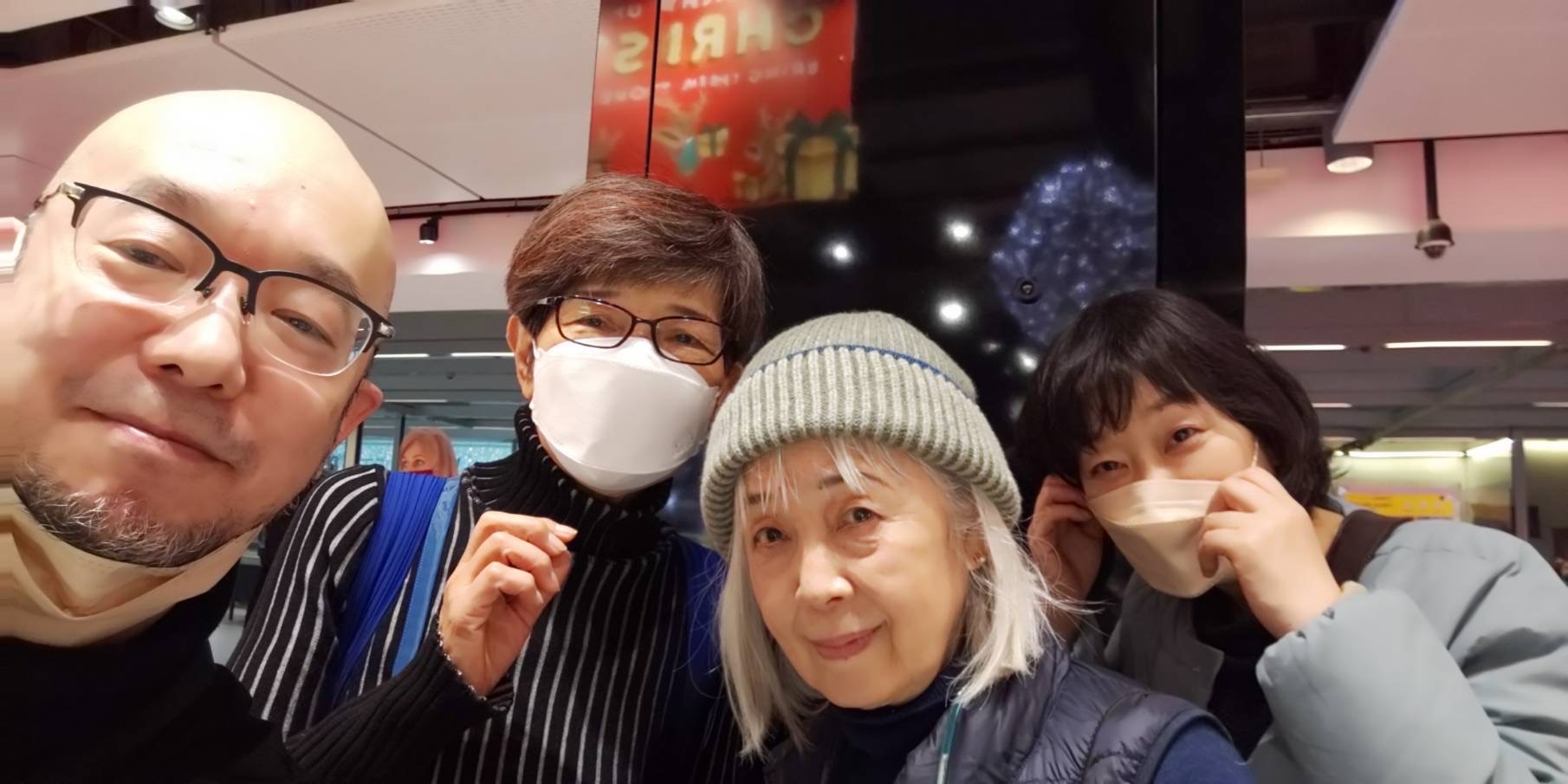 Our Japanese visitors - Takashi, Mitsuko, Miho and Hideyo - bid a final farewell from Dublin airport before boarding their flight to Tokyo. It was such an inspiring exchange and we look forward to working with our Japanese friends again soon.

Introduction, Context and Response to Black Milk: Professor Rióna Ní Fhrighil, Director of Republic of Conscience and Co-Director of the Aistriú Project - 15 December 2021

It is an honour that Miho Ohtsubo’s first exhibition in Europe is being hosted in our city on the edge of Europe, Cathair na dTreabh. Originally planned as part of Galway 2020’s cultural programme in April 2020, we are delighted [and relieved] to have finally arrived at this moment of actually opening the exhibition.

I extend a heart-felt thank you to Miho, Mitsuko, Hideyo and Takashi for their commitment to making this happen despite the considerable challenges that a global pandemic and, more recently, an unexpected storm posed.

Before speaking about the partnership and the installation itself, I wish to thank some key players in this collaboration:

One of the poems prominent in that research is ‘Dubh’ by Nuala Ní Dhomhnaill, written in response to the fall of Srebrenica in 1995 during the Bosnian War.

‘Dubh’ is the most translated and most widely disseminated poem about Srebrenica, written in either Irish or English, by an Irish poet.

Mitsuko Ohno’s translation of ‘Dubh’ into Japanese – Kuro [cúr-ó] – is a work of art in its own right. It is also an example of the ethical imagination at work  across cultural, linguistic, and geographical boundaries.

Miho Ohtsubo’s translation of ‘Dubh’ carried Ní Dhomhnaill’s work across an additional boundary – that of artform.

‘Black Milk’ is an act of transcreation; a visual response to a printed poem.

It is a commitment to human rights in the face of human wrongs.

I am a literary scholar, not an art critic, but I would like to make two observations about this hauntingly beautiful art installation:

Firstly, the fall of Srebrenica in July of 1995 – referenced in Nuala’s poem led to the single largest act of genocide on European soil since the Holocaust.

But of course, Black Milk: Family Portrait extends the terms of reference further – the emaciated figures of this installation could equally be victims of famine; victims of terror or victims of nuclear attacks.

They belong to that, sadly, every-growing family of humans who have in the past or in the present, in our times and on our watch, been deprived of human dignity and rendered vulnerable.

This brings me to my second observation that pertains to the sheer physicality of this installation.

This is an intimate space where the viewer is confronted with an unsettling sight.

Black Milk, however, does not allow the viewer to indulge in a feeling of empathy for victims of extreme violence. Instead, it also challenges us to consider how the suffering of others exists on the same map as our privileges.

In this intimate space, in the face of these emaciated bodies, the viewer is being held to account for themselves. How are we implicated in the suffering of fellow humans?

Our complicity may be as a result of our choices as consumers, our political stance, or our sheer indifference or apathy.

In contrast to news media reportage, Black Milk: Family Portrait allows for an understanding of the events at Srebrenica in a much wider context – in a transnational context across time and space. It bears witness in a way that is much less ephemeral than the new report that quickly becomes obsolete as the reader or the viewer moves on to the next headline.

The pieces Witness 1 & Witness 2 displayed along with Black Milk attest to this transnational and trans-temporal sensibility.

In conclusion, Black Milk: Family Portrait focuses on the shadow side of humanity

That said Black Milk is not nihilistic or without hope.

The meticulous dressing of each figure, the care with which every cloth was folded and tied and viewed and revised, could only be the work of a person who is committed to human values, to global citizenship that is just, to the ethical imagination.

Miho Ohtsubo is indeed a true citizen of the Republic of Conscience.

This exhibition has a short run, but two of Miho’s works will remain in Galway as part of the University’s Art Collection.

I congratulate Miho Ohtsubo and her team and it is with enormous pleasure and gratitude that I declare this exhibition officially opened.