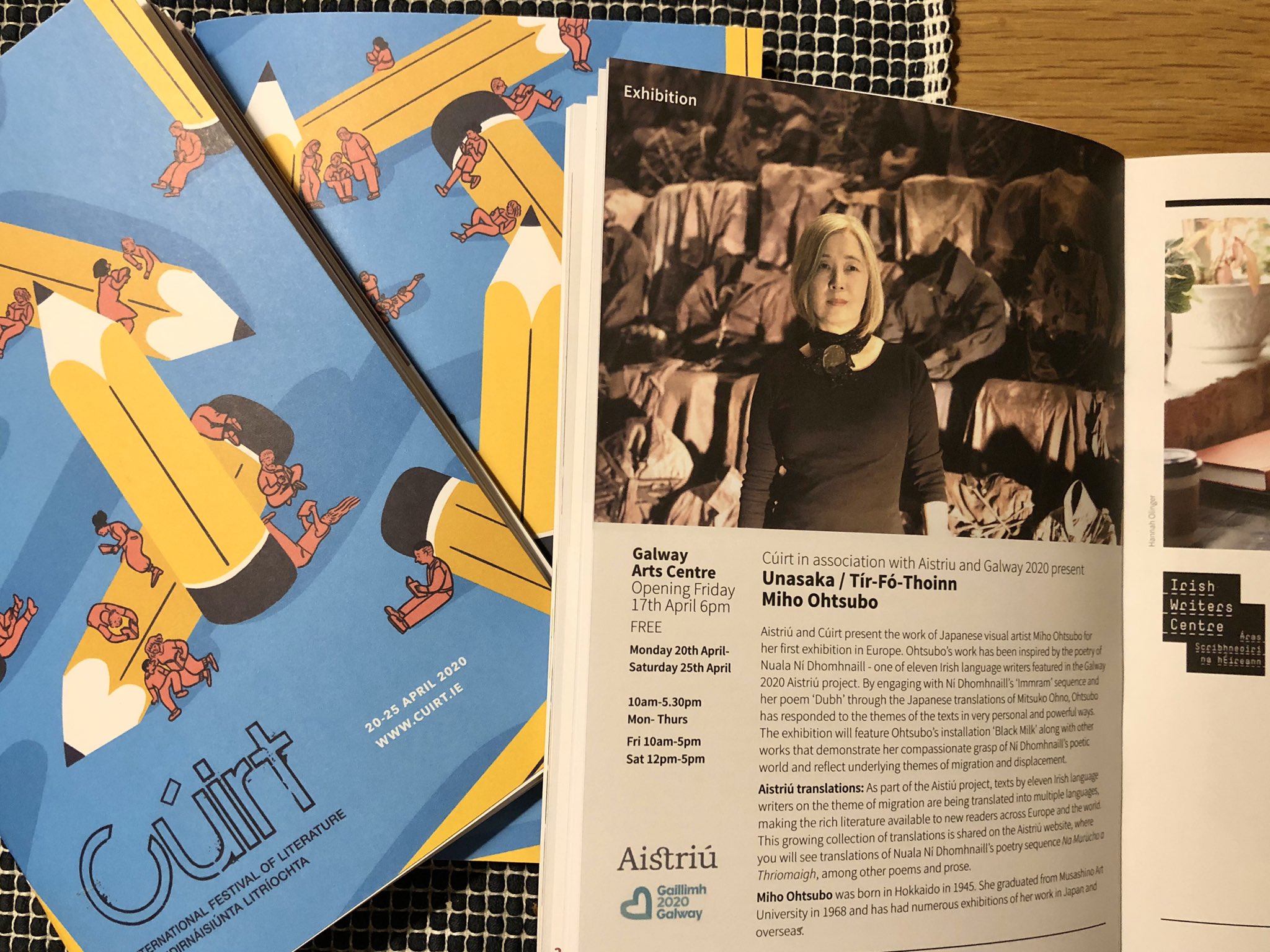 At its core, the Aistriú project invites the world to explore Irish literature in different territories, languages and artforms.

We are delighted, therefore, to collaborate with the Japanese creative team of visual artist Miho Ohtsubo and scholar and translator Mitsuko Ohno on the Unasaka / Tír-fó-thoinn exhibition, which responds directly to the poetry of Nuala Ní Dhomhnaill’s. Over time Miho and Mitsuko have been joined by Japanese musicians and composers Chikuzan Takahashi II and Tomomi Oda, and videographer Yuhei Kodaka  This multidisciplinary creative team has come together under the collective banner of ‘Art Transcreation Ireland-Japan’ to create work inspired by Ní Dhomhnaill poetry. Together they explore the universal theme of displacement in Ní Dhomhnaill’s poems and reimagine her words, characters and worlds in original music, song, art and writing.

Unasaka / Tír-fó-thoinn was intended as an exhibition, talks and workshops as part of the 2020 Cúirt International Festival of Literature. Miho’s artworks had been transported to Galway, an exhibition was scoped out by the Galway Arts Centre team, flights and accommodation was booked for Miho and Mitsuko, and then… COVID-19 struck. We were heartbroken to have to cancel the exhibition, talks and workshops. However, our Japanese collaborators didn’t give up there. We are delighted that Mitsuko and Miho have collaborated with Chikuzan, Tomomi and Yuhei to share their work digitally with us here.

Mitsuko Ohno and Miho Ohstubo have been collaborating for 20 years through word and art in response to Nuala Ní Dhomhnaill’s poetry. The video below presents some of the most recent output of this creative endeavour.

Miho Ohtsubo had planned to produce a video for the Cúirt exhibition to show her larger art installations and asked Yuhei Kodaka to take videos of her works shown in a large group exhibition ‘Earth Attack’, held in November and December 2019 at Aichi Prefectural Art Museum in Nagoya. Miho’s work responds in powerful ways to Nuala Ní Dhomhnaill’s poetry, in particular her Immram series. In the video, you will see her art installation ‘Black Milk’, which was created in response to Ní Dhomhnaill’s despairing account of the bombing of Srebrenica in 1995 in her poem ‘Dubh’, and would have been a central part of the Cúirt exhibition. Miho often accompanies her exhibitions with hands-on workshops that engage children in the craft of art-making. She had planned two such workshops in Galway as part of the Cúirt Labs series.

Mitsuko Ohno prepared a video of ‘Pharaoh’s Daughter’, composed by Chikuzan Takahashi II and Tomomi Oda and recorded during their concert at a music hall in Tokushima in December 2019. This extraordinary piece is inspired by Ní Dhomhnaill’s poem ‘Ceist na Teangan’, which references the biblical tale of Pharaoh's daughter rescuing Moses from the Nile to describe the poet’s relationship with the Irish language, or perhaps, as a metaphor for the process of translation itself. This musical reinterpretation blends exquisite Japanese Tsugaru-shamisen folk song and Western piano, with reference to traditional Irish music.

Production of these two videos was made possible by Yuhei Kodaka joining the team, which has added another dimension to their trans-creation project. The group sincerely hope that seeing these videos will make viewers feel convinced that poetry crosses linguistic and national borders through translation, and inspires artists to create their own new work, beyond the boundary of genres.

We would like to acknowledge the role of EU-Japan Fest in sponsoring this project. Since 1992, EU-Japan Fest has been supporting cultural exchange between the European Union and Japan, and we are grateful for their ongoing support for Unasaka / Tír-fó-thoinn.